Once a month I'll be posting a dessert recipe with excerpts from a book that's struck me just right, whether it be gorgeous descriptions, funny dialogue, swoon-worthy kisses, sarcastic come-backs, or spine-tingling encounters. 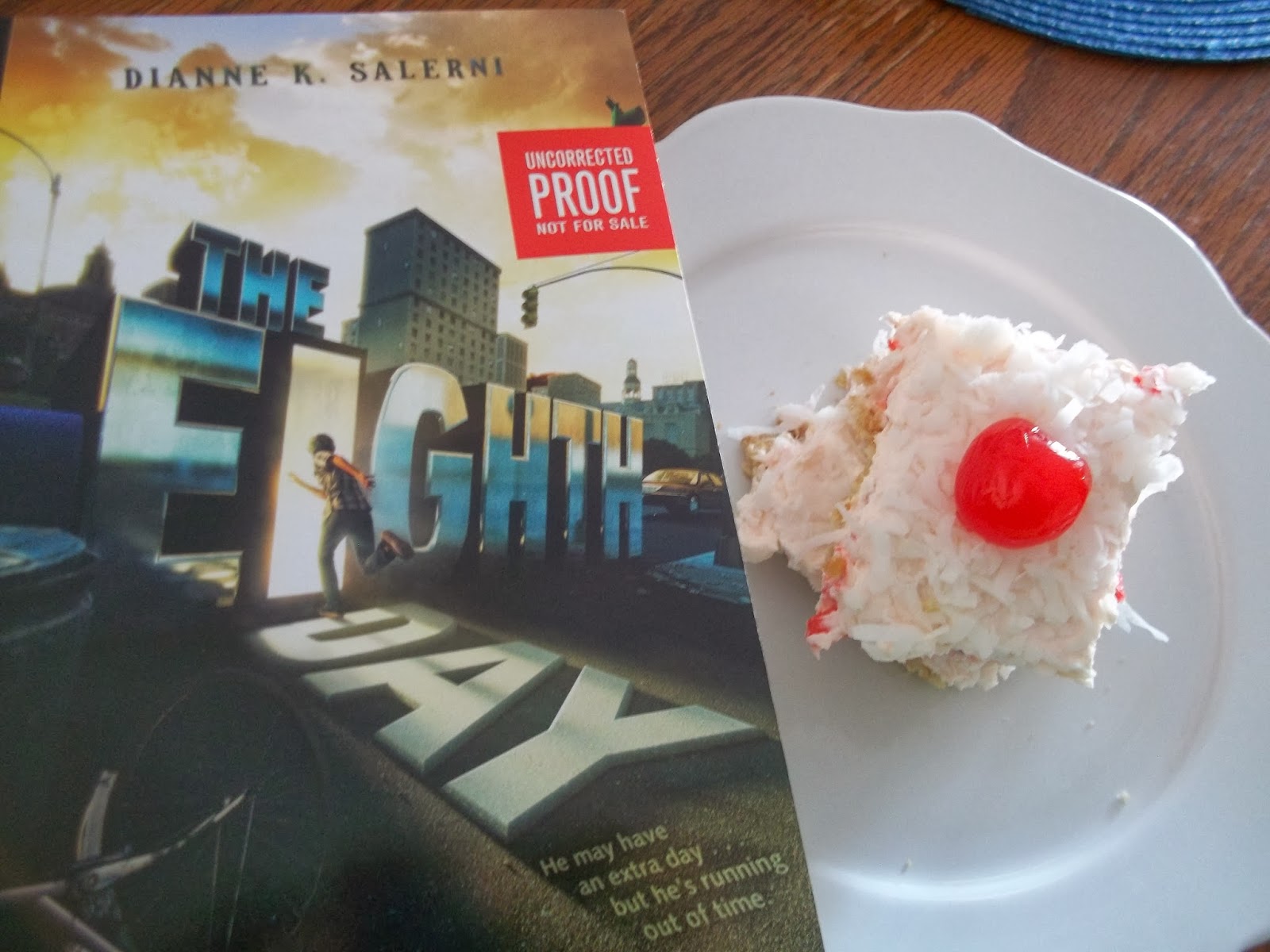 Because this book deserves every bit of squeally-gushiness I can muster. If there's one MG book that you pick up in 2014, this should be it. And for those of you that might not venture far from the YA lanes, TED is actually a bit of a cross-over, in my opinion. One of the other mc characters beside Jax, is Riley, his 18-yr. old guardian.

"He eats everything in sight," Riley protested, his own mouth full. "I can't keep groceries in the house!"

Jax looked up, startled. He thought the exact same thing about Riley.

"Nobody can eat like a teenage boy." Mrs. Crandall slung a ladle full of mashed potatoes on Jax's plate. "The pair of you together are probably like piranha."

Uh-huh. When my older brother and his friends were hanging out at the house, food was gone in minutes. Now after Jax and Riley, there's Evangeline. And I love that Jax is simply... her friend, and that's all he wants to be. And does he ever turn out to be a loyal, true-blue friend! Towards the end of the book he becomes her- whoops! That'd be too spoilery! =) Just to show you some of his devotion, here's one of my fav things he says to her(with Evangline speaking first to give you the context):

"That spell's too hard to hold for more than a couple minutes," she said. "It would have to be something else. Do you think you can remember a brief incantation in Welsh?"

"I'll be freakin' Harry Potter if you need me to be."

Seriously, guys, if you want a book that will keep you flipping voraciously to the next page, and has a premise that you've never read about before- an extra day of the week that can only be accessed by descendants of Arthurian legend- you'll want to read TED. 'Cuz, c'mon, who hasn't dreamed of extra time to get things done? *holds up hand and waves it madly*

And on a side note: this is the first ARC I've ever received(thank you, HarperCollins!!!). And while incredibly awesome...it kinda also stinks. Because I've read this book, loved this book, and now I'm ready for the next book. And the first hasn't even officially came out yet. *looks around glumly*

Well, if there's anything that'll make me feel better about this, it's dessert! And in honor of TED ending in a more exotic locale- Mexico!- the recipe I'll be sharing this month is for...

1. In a large bowl, combine vanilla wafer crumbs and melted butter. Press into the bottom of a 9x13 pan.

2. In a large bowl, beat cream cheese and cream of coconut until smooth and blended. Fold in Cool Whip until combined. Then fold in pineapple and cherries and spread evenly over prepared crust. Top with coconut and refrigerate for at least 3 hours.

And for those of you wondering who won last week's 'His' and 'Hers' Spine Poetry contest- it was me! Which is a big relief, b/c if the hubs had won, I'd have never heard the end of it...  =)

Also before I go, here's the full blurb for The Eighth Day:

In this riveting fantasy adventure, thirteen-year-old Jax Aubrey discovers a secret eighth day with roots tracing back to Arthurian legend. Fans of Percy Jackson will devour this first book in a new series that combines exciting magic and pulse-pounding suspense.

When Jax wakes up to a world without any people in it, he assumes it's the zombie apocalypse. But when he runs into his eighteen-year-old guardian, Riley Pendare, he learns that he's really in the eighth day—an extra day sandwiched between Wednesday and Thursday. Some people—like Jax and Riley—are Transitioners, able to live in all eight days, while others, including Evangeline, the elusive teenage girl who's been hiding in the house next door, exist only on this special day.

And there's a reason Evangeline's hiding. She is a descendant of the powerful wizard Merlin, and there is a group of people who wish to use her in order to destroy the normal seven-day world and all who live in it. Torn between protecting his new friend and saving the entire human race from complete destruction, Jax is faced with an impossible choice. Even with an eighth day, time is running out.